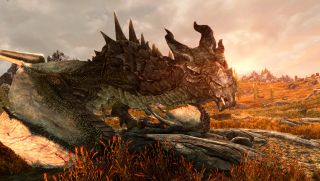 With a few hundred hours already sunk into Skyrim, it’s rare for me to feel much wonder or excitement while playing. I still enjoy Bethesda’s RPG as much as ever—though usually with a healthy helping of mods—but by now the world is so familiar there aren’t many sights or scenes that manage to draw a second glance.

VR is a great way to change how you view a familiar game by quite literally changing the way you view it. In the few hours of Skyrim VR I’ve played, I’ve spent more time stopping, standing, and staring that I have since perhaps the very first time I played it back in 2011. It’s wonderful, really, for a waterfall I’ve passed a hundred times in my travels to suddenly become something to stop and admire. The moons overhead at night are once again something to gawk at. And Skyrim’s dragons have reclaimed their might and majesty since I’m not just looking at them, but looking up at them.

Playing Skyrim on the HTC Vive Pro, I was bracing myself for the long, drawn-out introductory sequence that I’ve been through one too many times. But it’s actually pretty thrilling to experience it in VR. Instead of robotically rushing through the town of Helgen as quickly as possible to complete the tutorial and break into the open world, I really, y’know, played it. Sure, the wagon ride and the wait for your turn on the chopping block is still a bit overlong, but when the dragon shows up and starts tearing the town apart, Skyrim VR becomes a real thrill. Dragons actually feel dangerous again: they’re just so damn big and scary and imposing now. In a lot of ways, it felt like playing Skyrim for the first time again. That’s what VR can do for a familiar game. 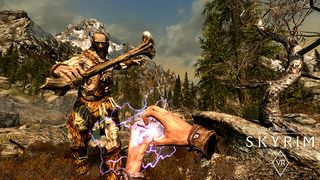 You can us the standard teleportion option to get around—point a beam at the spot you want to travel to, and simply appear there—or you can use normal locomotion if it doesn’t make you motion sick. I typically don’t experience motion sickness in VR, so I used the normal locomotion option, and found it worked just fine. There’s also a particular pleasure in opening the map and finding yourself suspended above the world, all of Skyrim laid out below you. You don’t just scroll around in it, it’s like you’re flying.

Skyrim’s VR’s combat is also fun: it’s a novel experience to notch an arrow, draw back the bowstring, aim, and let it fly using both controllers. Blocking incoming arrows or blows by holding up your shield (and collecting the arrows that have punctured your shield after the fight), swinging your sword or axe, and using two-handed magic to unleash terrific gouts of flames: that all feels fun and fresh in Skyrim VR, too.

But the wonder of seeing the world through new eyes and the novelty of scorching enemies with outstretched flame-hands can only last so long. Eventually the weaknesses and limitations of a huge game retrofitted for a headset become apparent. As with Fallout 4, Skyrim is as much about using menus as it is about exploration and combat, and VR just isn’t a great match for such menu-dependent games.

There’s a lot of scrolling through the inventory, examining items, equipping them, comparing, sorting, selling, and so on. Not only is this a bit awkward to accomplish with the HTC Vive’s controller thumbpads, but it’s time-consuming in a way that’s not as apparent when playing on a desktop PC. One of the ongoing issues with VR is how long players will be comfortable wearing the headset, and when a game is so reliant on multiple menu screens, that subtracts from the time spent doing the fun things like combat and exploration. Nearly every time you do anything in the game, like loot an enemy or open a chest or pick out a potion, you’re going to use the menu. Playing in VR with a headset and dual controllers for an hour can leave you feeling hot, sweaty, and tired, and if half that time is spent mucking around in menus instead of battling giants, it’s also bound to leave you feeling impatient and unfulfilled. 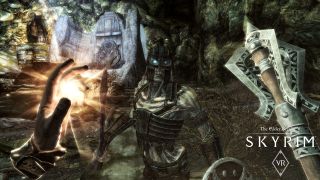 Games built for VR from the ground up often have a level of interactivity that just isn’t present in existing games adapted for VR, and in addition to over-reliance on menus, Skyrim shares another of Fallout 4’s problems in virtual reality: there simply isn’t enough natural interaction with the world to feel truly immersed.

This doesn’t make Skyrim a bad VR experience, it’s just not as immersive as it could be. Seeing a familiar game in a new way, being in awe of some of the sights it contains, and swinging a sword or shield around is fun, but a truly convincing VR experience requires non-violent interactions that feel natural, too. Otherwise, it’s just hard to forget you’re wearing a headset and standing in your room instead of visiting another world.